There was never a dull moment at this year’s ESMO’2022 as the congress ends with a sign of progress in a few clinical studies but also delivers the negative outcomes in some follow-up studies. About 30,000 participants from more than 150 countries attended the congress to witness nearly 1900 abstracts from various oncology disciplines. Among five important phase III studies presented in the renal cancer space, the highly anticipated results from the “adjuvant trio” - IMmotion010, CheckMate 914, and PROSPER – fell short of the expectation. Results from the CheckMate 914 trial that assessed nivolumab and ipilimumab vs placebo as adjuvant therapy did not meet the primary endpoint of DFS. After 37.0 months of median follow-up, the DFS in the combination arm showed only sub-10% numerical improvements with insignificant p values in patients with localized RCC at high risk of relapse after nephrectomy. While the safety profile was consistent with its known profile in advanced RCC, the rate of discontinuation due to treatment-related AEs was higher with adjuvant NIVO and IPI as compared to placebo in this trial. These findings showed that NIVO + IPI combination is no better than placebo in terms of DFS improvement. Further analyses are underway to assess the role of adjuvant nivolumab monotherapy (part B cohort study). Even though this combination fails to demonstrate clinical and statistical significance in the adjuvant RCC setting, this combination or nivolumab alone have demonstrated clinical benefits in the advanced disease settings.

Similarly, results obtained from PROSPER showed that neoadjuvant nivolumab prior to nephrectomy followed by adjuvant nivolumab did not improve recurrence free survival in RCC patients at high risk for recurrence. OS data remains immature but is not statistically different between arms. Subset analyses including risk stratification by pathologic stage are ongoing. In the phase 3 IMmotion 010 study, authors explored the utility of anti-PD-L1 atezolizumab as adjuvant therapy in RCC patients at increased risk of recurrence after resection. Atezolizumab adjuvant therapy did not improve clinical outcomes vs placebo after resection in the ITT population but had a manageable safety profile. Although there may be some caveats in study design and methodology which led to unsuccessful outcomes in these three trials, researchers are cautiously optimistic that future trials and analyses will provide better outcome as we learn and move forward.

The dilemma that is faced by clinicians and patients is that despite these results we have the Keynote 564 trial that demonstrated clinical benefit in both high-risk resected patients and those with oligometastatic disease treated with Pembro. We need to understand the differences in study populations studied that can help explain why similar drugs succeeded in some patient populations but not in others. We await the presentations of these abstracts in peerreviewed publications for additional scrutiny.

COSMIC-313 trial (NCT03937219) is the first phase III trial that compares a triplet regimen to IO doublet therapy as a control in aRCC. In this study, investigators sought to assess the impact of combining a third agent (TKI) to the dual checkpoint inhibitor backbone in the poorand intermediate-risk RCC patient population. Addition of cabozantinib to nivolumab and ipilimumab combination prolongs progression-free survival in patients with intermediateto poor-risk RCC. However, there are some drawbacks as well; the response rate was only marginally improved in the triplet arm as compared to the doublet arm. In both arms, median duration of response was not reached. The safety profile was consistent with known safety profiles for each monotherapy as well as the combination regimens used in this study. Grade 3 or 4 toxicity was higher in the triplet arm possibly due to the overlapping toxicity (73% vs 41%). Another potential limitation comes from the rate of TRAEs leading to discontinuation with almost half of the patients receiving triplet therapy needing some discontinuation of one of the three components. Follow-up data for the overall survival involving the entire study population (855 patients) is ongoing. We have to wait to see if further updates can make the triplet regimen as “practice changing” therapy in the clinical setting. Additionally, although cross-trial comparisons are fraught with complications, one would like to know how this triplet would deliver as compared to the already published Cabo/Nivo data. 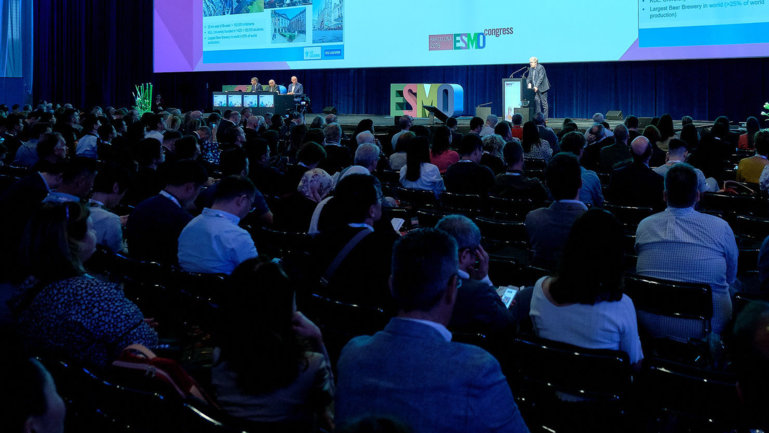 The CLEAR study is the latest of the IO-TKI studies evaluating first-line treatment of patients with advanced clear cell RCC. The outcome data from CLEAR study presented at ESMO22 confirmed the clinically meaningful benefit from lenvatinib and pembrolizumab as a firstline treatment option. The median PFS is 23.3 months in the combination arm versus 9.2 months in the control arm. When compared with alternative doublet treatment approaches such as CheckMate 214, KEYNOTE-426, and CheckMate-9ER, outcome data from the CLEAR trial demonstrated better safety/efficacy profile as compare to other trials in terms of median PFS (23.3 months), ORR (71%), and complete response rate (17%) in the experimental arm. For further details of the abstracts mentioned here, please refer Recommended Abstracts – ESMO2022 section in this issue.

Results from the phase 3 PIVOT-09 trial have shown that the combination of bempegaldesleukin with nivolumab failed to demonstrate a benefit compared to TKI monotherapy, in terms of overall survival, progressionfree survival, or objective response rate. Especially, in the intermediate and poor-risk subgroup, ORR was less common (23%) in the bempegaldesleukin plus nivolumab arm than in the TKI arm (30.6%). Given that the ORR of combination arm is lower to single agent nivolumab therapy, addition of bempegaldesleukin is rather providing reversing effect of nivolumab. The interim analysis from the phase 2 of LITESPARK-003 trial (NCT03634540) shown the meaningful survival advantage of HIF inhibitor belzutifan plus cabozanitinib as first-line therapy for patients with intermediate and poor-risk disease in advanced renal cell carcinoma (RCC). Overall objective response rate (ORR) was 57% and the combination had manageable safety. 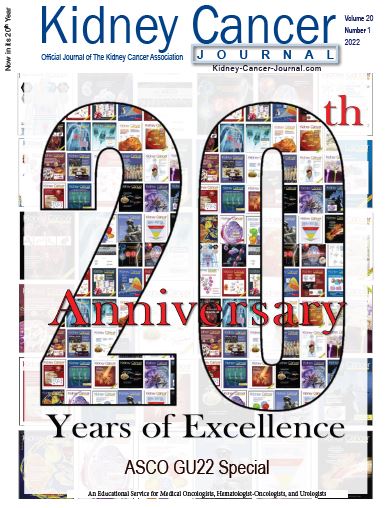 It is remarkable to be celebrating the 20th anniversary and the incredible journey of our journal for the last two decades. We have reached this important milestone only through unwavering commitment for the cancer community we serve. Over the years, the KCJ has continuously placed itself at the forefront of providing roundtable discussions, webinars, expert perspectives and conference coverages that set the stage for the KCJ to evolve as a voice of the kidney cancer community. Today, our KCJ is more relevant and important than ever as we serve for the last two decades. As a part of our 20th Anniversary series, we provide a retrospective review of advances in the clinical research and therapeutic strategies. I am so proud to have been part of the evolution of KCJ, and I want to thank and recognize the visionary editorial staff and volunteers. We look forward to our continued reporting of scientific discoveries for the many decades to come! 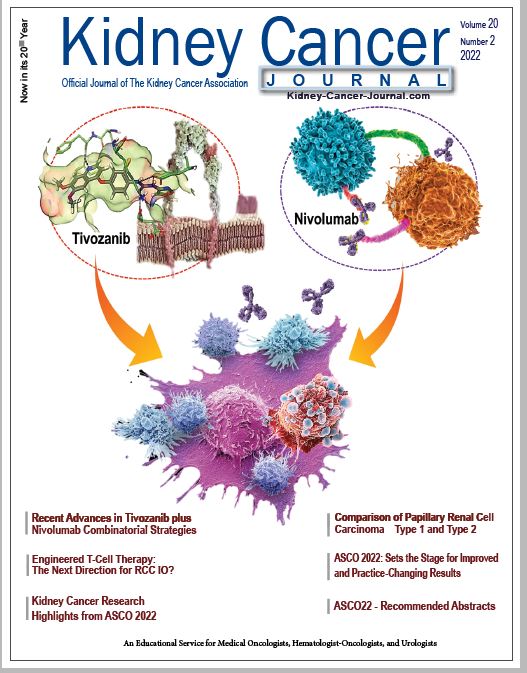