The first therapy for adults with relapsed or refractory advanced renal cell carcinoma who have received two or more prior systemic therapies has been granted approval by the FDA. This US FDA approval was granted based on the data from the phase 2 TIVO-3 clinical trial (NCT02627963). TIVO-3 is a controlled, multicenter, open-label, phase III trial of 350 patients with highly refractory metastatic RCC who had failed ≥2 prior regimens, including VEGF TKI treatment.

Lead investigator Dr. Brian Rini of this trial (NCT02627963) along with other senior investigator Dr. Thomas Hutson discussed the TIVO-3 outcomes and prospect of tivozanib for combinatorial therapy with other IO agents (See Page 4: Roundtable Discussion Section in this issue). Results that the hazard ratio for overall survival (OS) with tivozanib versus sorafenib was 0.97 (95% CI, 0.75-1.24; P =.78). The median OS in the tivozanib arm was 16.4 months (95% CI, 13.4-22.2) and 19.2 months in the sorafenib arm (95% CI, 15.0-24.2). The study included a subgroup of patients who received previous checkpoint inhibitor and VEGF inhibitor therapy, and in this population, the HR for death was 0.55 and was 0.57 for those who received 2 prior checkpoint or VEGF inhibitors. In terms of response, tivozanib led to an 18% (95% CI: 12%-24%) overall response rate compared with 8% (95% CI: 4%-13%) in the sorafenib arm. Tivozanib appeared to have a favorable safety profile during the study. Treatment-related adverse events (TRAEs) were observed in 84% compared with 94% of the sorafenib arm. Serious TRAEs were observed in 11% of the patients who received tivozanib compared with 10% of those treated with sorafenib.

On January 22, 2021, the Food and Drug Administration approved the combination of nivolumab (Opdivo, Bristol- Myers Squibb Co.) and cabozantinib (Cabometyx, Exelixis) as first-line treatment for patients with advanced renal cell carcinoma (RCC). The approval of nivolumab/cabozantinib combination regimen is based on findings from the phase 3 CheckMate-9ER trial (NCT03141177). Results indicated that the combination reduced the risk of disease progression or death by 49% versus sunitinib (Sutent) in treatment-naïve patients with advanced RCC, with a median progression-free survival of 16.6 months versus 8.3 months, respectively (HR, 0.51; P <.0001). The objective response rate (ORR) was also doubled with nivolumab/ cabozantinib in this setting compared with sunitinib, at 55.7% versus 27.1%, respectively (P <.0001). In the combination arm, the complete response (CR) rate was 8.0%, the partial response (PR) rate was 47.7%, and the stable disease (SD) rate was 32.2%. Additionally, 5.6% of patients had progressive disease (PD) and 6.5% were not evaluable or not assessed. In the sunitinib arm, the CR, PR, and SD rates were 4.6%, 22.6%, and 42.1%, respectively. Regarding safety, the incidence of the most common, any-grade and high-grade treatment-related adverse events (TRAEs) were similar in both arms. The overall rate of serious AEs was similar between the 2 groups; however, liver toxicity was more common with cabozantinib/nivolumab. Nineteen percent of patients on the combination required corticosteroids due to immune-related AEs, 4% of whom needed corticosteroids for at least 30 days.

The novel, selective HIF-2 alpha inhibitor belzutifan was granted a priority review by the FDA for the treatment of patients with VHL–associated RCC who do not require immediate surgery. The primary end point of the study is ORR in VHL disease–associated RCC tumors and secondary end points include DOR, TTR, PFS, and time to surgery (TTS) in VHL disease– associated RCC tumors as well as ORR, DOR, TTR, PFS, and TTS in non-RCC tumors. This open-label phase 2 Study-004 trial (NCT03401788) supported the NDA, showing a significant response rate of 36.1% (95% CI, 24.2%-49.4%) in patients with VHL disease–associated RCC treated with belzutifan. Treatment-related adverse events (TRAEs) were observed in 96.7% of patients, most of which were grade 1 or 2 in severity; no grade 4 or 5 TRAEs were reported. The most common TRAEs were anemia in 83.6%, which was considered an on-target toxicity; fatigue in 49.2%; and dizziness in 21.3%. Grade 3 TRAEs, primarily fatigue and anemia, were reported in 9.8% of patients. Belzutifan is also being investigated in phase 3 trials as a monotherapy and in combination regimens in patients with RCC.

Nivolumab Plus Ipilimumab Sparks Hope for Patients With RCC and Sarcomatoid Features.

Nivolumab plus ipilimumab combination therapy has improved survival and response rates compared with sunitinib, in patients with advanced renal cell carcinoma with sarcomatoid histology, including those with intermediate and poor-risk features. The post hoc, phase 3 CheckMate 214 clinical trial evaluated the efficacy of nivolumab (Opdivo) plus ipilimumab (Yervoy) versus sunitinib (Sutent) in patients with sRCC. 139 patients had sRCC and intermediate/poor-risk disease and 6 had favorable-risk disease from 1,096 included in the study. The study found that led to unprecedented long-term survival, response, and complete response when compared with sunitinib. Based on the results, investigators support the use of nivolumab plus ipilimumab as frontline treatment of patients with sRCC. PFS, on the other hand, was significantly longer with nivolumab plus ipilimumab at 26.5 months (95% CI, 8.4 to NE) compared with the 5.1 months (95% CI, 4.0-6.9) seen with sunitinib (HR, 0.54; 95% CI, 0.3-0.9; P = .0093). The median OS however was not reached with nivolumab plus ipilimumab (95% CI, 25.2 months–not estimable [NE]) versus 14.2 months (95% CI, 9.3-22.9) vs sunitinib (HR, 0.45; 95% CI, 0.3-0.7; P = .0004). Patients who received nivolumab with ipilimumab also achieved a higher ORR of 60.8% (95% CI, 49%-72%) compared with 23.1% (95% CI, 14%-35%) in the sunitinib arm (P < .0001). The complete response rate in the combination arm was 18.9% compared with only 3.1% in the control arm. "I believe patients with clear cell RCC, who have sarcomatoid features in the tumor should be, in my opinion, nivolumab and ipilimumab if you're doing that for treatment in first line setting, I think the data we have from Checkmate-214 support this recommendation as the preferred first-line therapy for these patients" said Nizar Tannir, lead author of this trial.

By using single-cell RNA sequencing, researchers from Dana-Farber Cancer Institute and the Broad Institute of MIT and Harvard investigated how kidney tumors' microenvironments change in response to immunotherapy. Researchers discovered that in advanced stage disease these CD8+ T cells were "exhausted," and not able to carry out their usual function. "These companion studies shed important new light on the biology of advanced kidney tumors and their surrounding environments. With this increased understanding, researchers will be able to identify new potential drug treatment targets and, overall, expand the number of patients who can receive effective treatment." said Catherine J. Wu, MD, professor of medicine at Harvard Medical School. “A patient’s immune system plays a critical role in controlling both the progression of cancer and the response to immune therapies,” adds Toni K. Choueiri, MD, co-senior author of this paper. In other study, researchers performed single-cell RNA and T cell receptor sequencing on 164,722 individual cells from tumor and adjacent non-tumor tissue. They also discovered more anti- inflammatory or "M2-like" macrophages, a type of white blood cell that suppresses the immune system, in advanced stage disease. CD8+ T cells and macrophages were playing off each other and caught in an "immune dysfunction circuit," said co-lead author David A. Braun, MD, PhD, an oncologist at Dana-Farber. "There may be immune evasion mechanisms outside of PD-1/PD-L1 that play an important role in response or resistance,” said Kevin Bi, computational biologist at Dana-Farber and co-lead author on the paper. Study found that immune dysfunction circuit is associated with a worse prognosis in external cohorts and identifies potentially targetable immune inhibitory pathways in ccRCC. 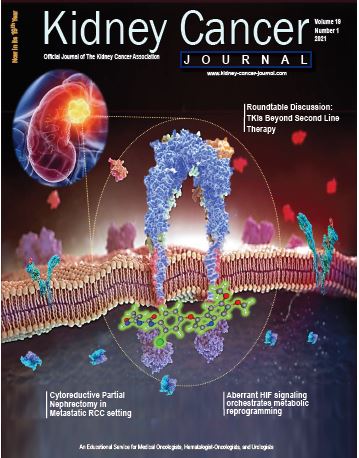