In 2021, promising clinical outcomes from pivotal phase III CheckMate-9ER (NCT03141177) and CLEAR (NCT02811861) studies have secured the place for cabozantinib plus nivolumab as well as lenvatinib plus pembrolizumab respectively in the already crowded therapeutic landscape of renal cell carcinoma. New trials such as COSMIC-313 (NCT03937219) and the PDIGREE (NCT03793166) are currently evaluating different combinations of ipilimumab, nivolumab, and cabozantinib. The evolution of RCC therapies, demonstrates continuous improvement of new PD-1or PD-L1 inhibitor/TKI doublets as a shift away from monotherapies towards doublet therapy strategies. However, for those subpopulations of RCC that do not optimally benefit from checkpoint inhibitors or TKI therapies, the quest is still on to identify alternative class therapies. To this direction, recent findings from the phase 2 Study-004 trial (NCT03401788) demonstrated the encouraging clinical efficacy of the first-in-class agent belzutifan, a hypoxia-inducible factor inhibitor. An overall response rate of 49% was reported in patients with von Hippel-Lindau (VHL)–associated RCC that does not require immediate surgery. Following such strong performance, FDA on August 13th, 2021 approved belzutifan not only for VHL disease-related RCC but also for hemangioblastomas and pancreatic neuroendocrine tumors. Bezultifan’s approval marks another significant step ahead for the management of RCCs based on their hypoxic pathway rather than their conventional TKI/IO mechanisms. Undoubtedly, such HIF-based therapies may now be positioned as the next breakthrough in cancer treatment following the success of checkpoint inhibitors. Currently, belzutifan in combination with cabozantinib was already investigated for synergistic potential in patients with advanced clear cell renal cell carcinoma (RCC). Similarly, a phase III trial (NCT04195750) evaluating MK-6482 vs everolimus in aRCC patients who progressed on IO plus a TKI is currently underway. The advent of such hypoxia-based novel therapies targeting the VHL pathway could revolutionize the treatment of renal cancer patients in the decades to come. However, in addition to improving the way IO-, TKI-, and HIF-based drugs are evaluated and used in clinical practice, equally challenging is the cross-trial comparison for these new agents. In the absence of comparative data, optimal treatment selection is frequently influenced by patient-specific factors or provider preference. We are just a few weeks away from the upcoming IKCS 2021 that can keep abreast of the latest advances in the care and treatment of people with kidney cancer. Following virtual conferences in the recent past, this year’s symposium will be a hybrid event accommodating both inperson in Austin, Texas, and also online attendees virtually on November 5-6.

Currently, due to the lack of predictive biomarkers in the RCC paradigm, there is a major unmet need for the identification of novel biomarkers predictive of treatment response or resistance. In particular, initial treatment selection and identification of novel targets in patients with non-clear cell renal cell carcinomas have not been established. In this issue, Halabi et al demonstrated the negative prognostic value for Akt pathway activation and the positive prognostic value for c-kit expression in a prospective clinical trial of sunitinib vs. everolimus in patients with nonclear cell RCC. Authors also showed that c-MET expression is associated with a poor response to sunitinib or everolimus, while c-kit expression is associated with a better response to everolimus. However, no predictive biomarkers of treatment response were identified for clinical outcomes. In the expert perspective column, Dr. Ramaprasad Srinivasan, the principal investigator of Study-004, reflected on the journey of the belzutifan agent from clinical trials to clinical practice and also explored encouraging clinical outcomes and prospective aspects from the Study-004 trial. In another Q&A session, Dr. Nicholas Vogelzang provided his perspectives about currently ongoing studies in the evolving therapeutic landscape of RCC and also shared his insights on current challenges and prospective strategies in the management of mRCC. A review article which Dr. Thomas Hutson and I authored, outlines currently available treatment strategies, unprecedented changes, and also discusses challenges in the treatment landscape of RCC. 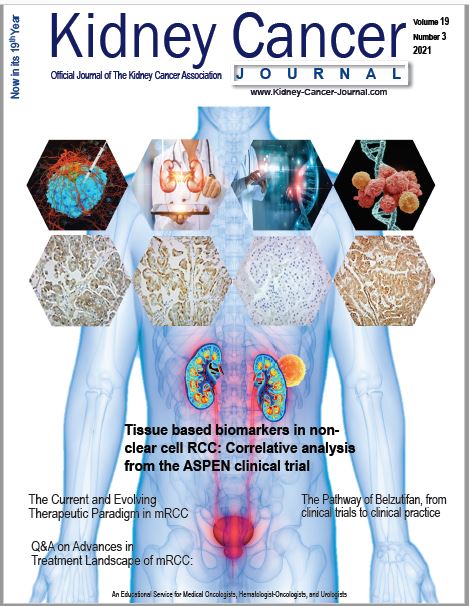