Cytoreductive nephrectomy in metastatic renal cell carcinoma has demonstrated a significant survival benefit in properly selected patients, however the role of cytoreductive partial nephrectomy in this setting and whether it undermines oncologic efficacy is not well defined. Indeed, cytoreduction coupled with nephron preservation to both optimize cancer control and abate the renal and cardiovascular morbidities of chronic kidney disease represents the preferred approach in patients with imperative indications for renal preservation. We present a case of a cytoreductive partial nephrectomy in a patient with metastatic disease in the context of a small renal mass and pre-existing chronic kidney disease and describe a framework for patient selection.

Renal cell carcinoma (RCC) accounts for 3% of adult malignancies and is the eighth leading cause of cancer in the United States1. Up to 30% of patients diagnosed with RCC present with synchronous metastases and recurrence is seen in 30% of patients after complete resection of the primary tumor2,3. Although the 5-year survival of earlystage RCC is 93%, patients presenting with metastatic disease have dismal 5-year survival rates of approximately 12%, and at least half of patients with RCC will eventually require systemic therapy4. Metastatic RCC (mRCC) can have an unpredictable and highly variable natural history which can range from indolent with years of small volume metastatic disease off treatment to rapid progression and death within months5.

Distinct clinical variables, including performance status, serum hemoglobin, corrected calcium, and serum LDH can segregate patients into risk strata associated with overall survival6. Identifying patients likely to derive benefit from cytoreductive nephrectomy poses a significant clinical challenge. Careful selection of patients for cytoreductive operations based on these prognostic models is key with avoidance of poor risk and debilitated patients unlikely to benefit who are referred instead for upfront systemic therapies7. Cytoreductive radical nephrectomy (cRN) classically involves radical nephrectomy, yet metastatic disease has been reported in 0.5-8% of patients with small renal masses which usually are of high grade with renal sinus, perinephric fat, or branched renal vein extension (T3a)8,9,10. Two published prospective active surveillance series report metastatic rates of tumors <4cm ranging from 0-1.1%11,12. In such patients, the role of cytoreductive partial nephrectomy (cPN) and whether it undermines oncologic efficacy is illdefined. We herein describe cPN in a patient with mRCC, a small renal mass, and pre-existing chronic kidney disease (CKD) and discuss the contemporary experience with cPN.

A 57-year-old male initially presented with a one-month history of an enlarging, painless right chest wall mass. His medical and surgical history is significant for hyperlipidemia and diverticulitis for which he previously underwent a sigmoid resection. His family history is remarkable for maternal aunts with non-small cell lung cancer, ovarian cancer, a maternal grandfather with bladder cancer, and a father who died of metastatic prostate cancer. He endorses a 7.5 pack-year smoking history but is not a current smoker.

He was taken to the operating room for thoracoscopy, chest wall mass resection, and cPN. Thoracoscopy revealed an approximately 6cm oval, lobulated soft tissue mass involving the lateral portion of the right ninth rib, and a small nodule in the right lower lobe superior segment. A right lower lobe wedge resection and right chest wall resection, including partial ninth rib and adjacent intercostal tissue, was performed without complication. The chest wall was reconstructed with the use of surgical mesh and a chest tube was placed. The right renal mass was approached via a separate 8 cm mini-flank incision and a cPN was successfully performed using a completely off clamp (no ischemia) approach. Total estimated blood loss for the combined resections was 300cc. The patient had an uneventful hospital course and was discharged on day 4 with a serum creatinine at baseline of 1.5. He has made a near complete recovery and at 6 weeks is being reassessed by the medical oncology team for either careful interval followup or the initiation of systemic therapy depending on an upcoming extent of disease evaluation.

Histopathologic examination of the partial nephrectomy specimen revealed a 5.5 cm clear cell RCC with negative surgical margins, Fuhrman Grade 3. Metastatic RCC was present in the right lower lobe wedge (0.25cm) as well as the chest wall resection (7.4cm) which involved bone, skeletal muscle, and fibroadipose tissue (Figure 4). All surgical margins were negative, and a pathologic stage of pT1bNxM1 was assigned.

Partial nephrectomy is a standard of care approach in select patients with localized renal tumors and provides the same local tumor control compared to radical nephrectomy while at the same time preserving renal function and preventing or delaying cardiovascular ill-effects of CKD14,15. However, a paucity of data exists regarding partial nephrectomy in the metastatic setting. As recently developed systemic therapies have extended life expectancies in patients with metastatic disease16, surgical approaches need to consider baseline renal function, avoidance of development of concomitant serious medical renal disease which carries its own distinct potential for cardiovascular morbidity and mortality, and improve patient’s ability to tolerate additional therapies. The surgical approach in this case was driven by two salient features, namely, his pre-existing CKD and the exophytic position of his small renal mass. Assuming that each renal unit in this patient contributes half to his overall renal function, a radical nephrectomy would potentiate his renal impairment to stage IV CKD (GFR 15-29) per the CKD-EPI creatinine equation17.

At baseline, CKD is more prevalent in the RCC patient, with 26% of patients having GFRs <60 despite normal serum creatinine18. CKD has been found to be an independent risk factor for the development of kidney cancer19. The benefit of partial nephrectomy in the management of the small renal mass was brought to light in a 2006 study from our institution; the incidence of new-onset CKD in patients with normal serum creatinine and two functioning kidneys who underwent nephron sparing surgery and radical nephrectomy for small renal masses was found to be 17% and 69%, respectively for a eGFR of a 60181. The effect was more remarkable at a GFR cutoff of 45 (2.9% vs. 35.9% respectively for PN VS. RN respectively).

Tumor size is an important predictor of survival in the localized setting, however limited data is available regarding the role of tumor size as a predictor of survival in the metastatic setting. In a report from our center, the impact of tumor size on survival in patients with mRCC at diagnosis who underwent CN was assessed20. Our cohort was comprised of 304 patients; 21 patients with tumors < 4 cm (8 patients underwent cPN; 13 patients underwent cRN), with an IMDC validation cohort (n=778). Extent of metastatic disease sites was directly related to primary tumor size. Smaller tumors were found to have fewer metastatic sites, a finding that was specific to tumors of clear cell histology. A significant difference in overall survival was observed when using a 4 cm size cutoff to distinguish small vs. large masses, and a subgroup analysis stratified patient into clear cell and non-clear cell histology, demonstrating that tumor size was a significant prognostic factor only in patients with clear cell RCC.

In 2006 and in 2007, two papers reported cause-specific survival data in metastatic RCC patients treated with cPN. In the first report from the Mayo Clinic, patients undergoing cPN (n=16) did not demonstrate inferior cancerspecific survival rates compared to those undergoing cRN (n=404)21. Although early and late complications were higher with cPN, there were no differences in complications in M1 pts undergoing cPN compared to a matched cohort of nonmetastatic patients undergoing partial nephrectomy. One critical confounder in this study was that 87.5% of the patients in the cPN group underwent complete resection of all metastatic disease (like our patient did) compared to only 22.5% in the cRN group. The second paper from the University of Montreal Health Center included larger patient numbers (cRN: 732 patients; cPN: 45 patients), and detected a 1.5-fold, albeit statistically nonsignificant, increase in cancer-specific mortality for cRN cases (p=0.2), confirming the non-inferiority cPN described in the previous study22. Given the multi-institutional nature of the study, differences in surgical and adjuvant treatments could have affected the results of this study.

The first retrospective study to demonstrate a survival benefit with cPN was published in 2013 from Roswell Park Cancer Center, which included 2,880 patients who underwent cRN and 70 patients who underwent cPN from the Surveillance, Epidemiology, and End Results (SEER) database23. Patients undergoing cPN were 0.54 times less likely to die and 0.49 times less likely to die of RCC than those who underwent cRN (95% CI 0.3–0.73, p<0.001 and 95% CI 0.35–0.69, p<0.001; respectively). The largest single institution study of cPN from MD Anderson Cancer Center reported in 2014 identified the indications for and outcomes of cPN with particular attention paid to cPN subgroups24. A total of 33 patients were included; 8 patients had bilateral synchronous tumors, 20 patients had metachronous contralateral tumors, and 5 patients had unilateral renal tumors. Although all patients had metastatic disease before PN, not all had metastatic disease at the original diagnosis; 17 (52%) presented with M1 disease, and 16 (49%) developed metastases after original diagnosis but before cPN. Twelve patients (36%) experienced 17 early postoperative complications within 3 months after surgery, ranging from Clavien grade 1 to 4a (the commonest complications including urine leak (n=5), acute kidney injury (n=2), and wound infection (n=2)). Patients who underwent cPN for a metachronous contralateral renal mass and a renal mass < 4cm had the best overall survival (61 and 42 months, respectively). A significant difference was observed in median overall survival in patients presenting with M1 vs. M0 disease27; vs. 63 months, respectively (p=0.003). These findings suggest that metastasis at original diagnosis and the timing of presentation of the index lesion have an important role in survival. 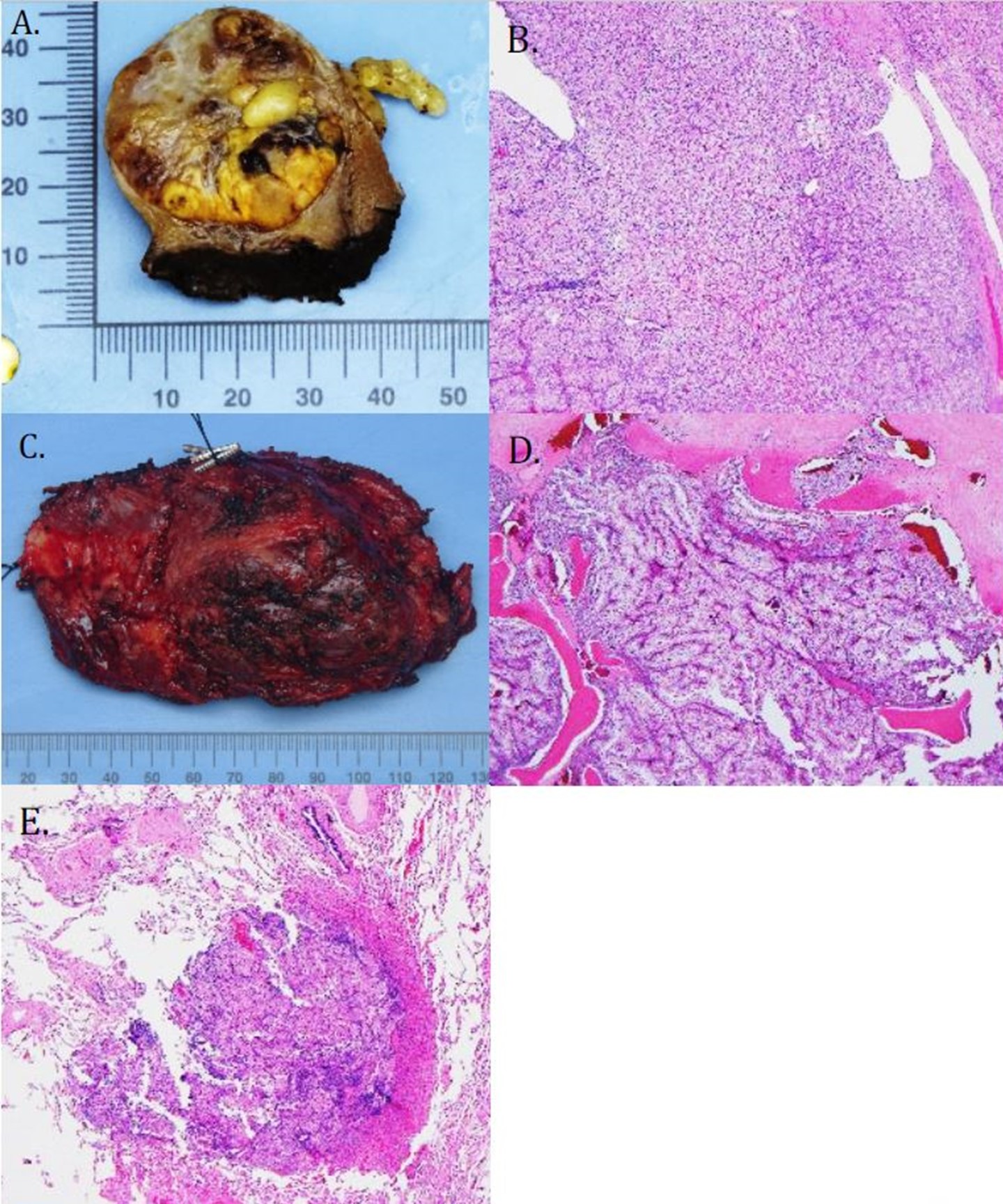 The most recent addition to the literature was a report from the National Cancer Database (NCDB) which examined the trends in usage of cPN and effect on overall survival in 10,144 patients with mRCC (9,764 patients undergoing cRN, 381 patients undergoing cPN)25. Rates of cPNc increased over the 2006-2013 study period, from 1.8% to 4.3%. Survival curves were constructed for a matched cohort, and overall survival was significantly improved in patients undergoing cPN compared to cRN, with a 1-year overall survival of 67% and 76% in the cRN and cPN cohorts, respectively. When stratified by tumor size, cPN conferred a survival advantage only in patients with tumors <4 cm, and in a multivariate analysis, cPN was found to be independently associated with improved overall survival (HR = 0.81; 95% CI: 0.71–0.93; p=0.002). As with all registry-based analyses, these data are limited by lack of important prognostic variables used in risk stratification, the extent of metastatic burden, and the systemic therapies received.

Our institutional practice is to recommend nephron sparing approaches when technically feasible. In this case the indication for cPN must be considered imperative given the patient’s pre-existing CKD. In the cytoreductive setting, consideration for cPN is given to patients with pre-existing CKD, and is prioritized in patients with an anatomically or functionally solitary kidney and those with bilateral renal masses. Careful preoperative assessment of tumor complexity is critical, and patient counseling should include the potential for post-operative complications including bleeding events and urinary fistulae (greater in the partial compared to radical nephrectomy), understanding that such events could potentially delay the start of systemic therapy and/ or enrollment onto a clinical trial. In patients in whom renal preservation is non-imperative (i.e. small renal mass with a normal contralateral kidney and no pre-existing CKD), cPN may be performed when technically feasible.

The role of partial nephrectomy in mRCC is currently supported by retrospective series which suggest the non-inferiority of cPN compared to cRN. Indeed, the framework for patient selection for cPN should prioritize those in whom renal preservation is imperative to prevent the further progression of CKD and its associated potential for cardiovascular morbidity and mortality and obviate the potential for end stage renal disease and dialysis. Partial nephrectomy in both the localized and metastatic settings demonstrate higher surgical complication rates compared to radical nephrectomy, and such risks, particularly for non-imperative indications, must be weighed against the benefits of nephron sparing approaches in properly selected patients.