Kaelin Delivers A Keynote Lecture On The Future Of The Treatment Paradigm In VHL Disease–Associated RCC.

William G. Kaelin Jr, MD, a co-recipient of the 2019 Nobel Prize in Physiology or Medicine, Sidney Farber Professor of Medicine, Dana-Farber Cancer Institute and Harvard Medical School, and an investigator at Howard Hughes Medical Institute, delivered a keynote address for the International Kidney Cancer Symposium (IKCS 2020). Dr. Kaelin spoke of recent research on effective treatment with the ability to target von Hippel-Lindau (VHL) disease–associated renal cell carcinoma (RCC)1. “Inactivation of VHL is not sufficient for renal carcinogenesis, even if it is an initiating event. In sporadic clear cell RCC, however, VHL inactivation is the initiation event and should be targeted. HIF2 inhibition is both necessary and sufficient for VHL tumor suppression. We think HIF-2 is the driver, or oncoprotein, in VHL–associated renal cell carcinoma cells and, if anything, HIF-1 seems to act as a tumor suppressor and is frequently lost in such tumors,” Kaelin said.

“You can start to dream what an eventual kidney cancer curative combination will look like. I suspect that it will contain a VEGF inhibitor, an immune checkpoint inhibitor, maybe a HIF-2α inhibitor, maybe a CDK4/6 inhibitor, and maybe even a MET inhibitor,” said Kaelin. Once, p53 was believed as an important target in these patients, however research has revealed that an intact p53 pathway is not essential for clear cell RCC HIF2-dependence, and TP53 knockout doesn’t alter PT2399 sensitivity of OSRC2 cells. “We no longer think p53 status is a biomarker for HIF2 dependence,” said Kaelin.

Though single agent TKIs such as bevacizumab (Avastin), sunitinib (Sutent), sorafenib (Nexavar), axitinib (Inlyta), pazopanib (Votrient), cabozantinib (Cabometyx), and lenvatinib (Lenvima) are indicated for RCC treatment, their use as single agents do not lead to responses in all patients, and in those who do, they eventually relapse.

Studies demonstrated that HIF-2 inhibitors alone did not generate responses in all patients. VHL -/- RCC is hypersensitive to the MET ligand hepatocyte growth factor/scatter factor in RCC, emphasizing that MET depletion preferentially kills VHL-/- cells, emphasized Kaelin. For example, the dual MET/VEGF inhibitor cabozantinib demonstrated an improvement in overall survival (OS) compared with everolimus (Afinitor), with a median OS of 21.4 months (95% CI, 18.7–not estimable) with cabozantinib and 16.5 months with everolimus (95% CI, 14.7-18.8), leading to a 34% reduction in the risk of death (HR, 0.66; 95% CI, 0.53-0.83; P = .0003).2

CRISPR-based lethal screens and utilizing CDK4/6 could be other synthetic lethality methods which appears to be HIF-independent. In an orthotopic VHL-/- kidney cancer mouse model, the CDK4/6 inhibitor palbociclib (Ibrance) was found to prolong survival, Kaelin added. Beyond its potential use in combination with HIF-2a inhibitors, CDK4/6 inhibitors could also be used as a way to enhance immunotherapy in solid tumors.5 “I think we might learn something from our friends in the world of breast cancer, because they already learned that combining tamoxifen with a CDK4/6 inhibitor is a good thing to do, and maybe that’s because when you add an ER agonist you lower cyclin D1 transcription, and cyclin D1 is then the partner for CDK4/6, which you’re now going to inhibit with a small molecule. Maybe we can do something analogous in kidney cancer by combining PT2399 with a CDK4/6 inhibitor at least for those tumors that are still HIF2 dependent.” Kaelin elaborated.

The most recent data, presented at the 2020 ASCO Virtual Scientific Program, showed that the HIF-2a inhibitor MK-6482 led to favorable efficacy and tolerability in patients with VHL disease–associated RCC.

In a phase 2 study (NCT03401788) in patients with VHL disease who have at least 1 measurable RCC tumor, did not receive prior systemic anticancer therapy, did not have metastatic disease, and had an ECOG performance status of either 0 or 1, investigators evaluated the efficacy of MK-6482, HIF-2α inhibitor. Results showed that treatment with MK-6482 led to a confirmed objective response rate (ORR) of 27.9% (95% CI, 17.1-40.8), which comprised 17 partial responses (PRs).5 43 patients (70.5%) achieved stable disease with the HIF-2α inhibitor. At 52 weeks, the progression-free survival (PFS) rate was 98.3%.6 Any-grade treatment-related adverse effects (TRAEs) TRAEs were mostly grade 1 or grade 2 (83.6%). Based on these data, the FDA granted a breakthrough therapy designation to MK-6482 for the treatment of patients with VHL disease–associated RCC who have nonmetastatic tumors of less than 3 centimeters, unless immediate surgery is necessitated.

The FDA Granted A Priority Review To Nivolumab Plus Cabozantinib In Advanced Renal Cell Carcinoma.

The FDA has granted a Priority Review designation to supplemental application for the nivolumab (Opdivo) plus cabozantinib (Cabometyx) combination for the treatment of patients with advanced renal cell carcinoma (RCC).1 The designation was granted based on data from the phase 3 pivotal CheckMate-9ER clinical trial (NCT03141177). This trial demonstrated that the combination reduced the risk of disease progression or death by 49% versus sunitinib (Sutent) in treatment-naïve patients with advanced RCC, with a median progression-free survival of 16.6 months versus 8.3 months, respectively (HR, 0.51; P <.0001).2 Additional findings showed that, at a median follow-up of 18.1 months, the median overall survival was not reached in either arm, and there was a 40% reduction in the risk of death with the combination (HR, 0.60; P = .0010).

The data from CheckMate-9ER study were presented during the 2020 European Society for Medical Oncology (ESMO) Virtual Congress. “With their complementary mechanisms of action and evidence that cabozantinib may promote a more immune-permissive environment, we believe there is opportunity for additive or synergistic effects with this potential combination regimen,” stated Gisela Schwab, MD, president, product development and medical affairs and chief medical officer, Exelixis.1

“The results from KEYNOTE-581/CLEAR (Study 307) support the potential use of KEYTRUDA plus LENVIMA for the first-line treatment of advanced RCC. These data also support the potential first-line use of LENVIMA plus everolimus, which is already approved in advanced RCC following prior antiangiogenic therapy,” said Dr. Takashi Owa, Vice President, Chief Medicine Creation and Chief Discovery Officer, Oncology Business Group at Eisai.

Treatment with MK-6482, an investigational HIF2α inhibitor, demonstrated durable efficacy as treatment of patients with Von Hippel-Lindau-associated renal cell carcinoma and non-renal lesions, according to phase 2 data presented during the 21st Annual Meeting of the Society of Urologic Oncology.

In the open-label phase 2 study, MK-6482 (NCT03401788), an investigational small molecule HIF-2α inhibitor, has shown demonstrated durable efficacy as treatment of patients with Von Hippel-Lindau (VHL)-associated renal cell carcinoma (RCC) and non-renal lesions, according to presented during the 21st Annual Meeting of the Society of Urologic Oncology (SUO).

Patients received 120 mg of oral MK-6482 once daily. At a median follow-up of 68.7 weeks (range, 18.3-104.7), the objective response rate (ORR) in RCC lesions among 60 evaluable patients was 36.1%, comprising 22 confirmed partial responses (PRs). There were also 7 unconfirmed PRs. Overall, 91.8% (n = 56) of patients had at least some decrease in the size of target lesions. The median time to response in renal tumors was 31 weeks, although responses were observed as long as 61 weeks after the start of therapy. The median duration of response had not yet been reached and the progression-free survival rate at 52 weeks was 98.3%. Thirty-eight (62.3%) patients reached stable disease, 1 patient was not evaluable for response, and 0 patients had progressive disease. Fifty patients had an ECOG performance status of 0, 10 patients had a performance status of 1, and 1 patient had a performance status of 2. In addition to renal tumors, all 61 patients had pancreatic lesions, 43 patients had brain hemangioblastomas, and 16 patients had retinal lesions. Key eligibility criteria for the open-label phase 2 study (NCT03401788) included a confirmed diagnosis of VHL disease (based on germline mutation), at least 1 measurable RCC tumor, and an ECOG performance status of 0 or 1. Prior systemic anticancer therapy was not allowed and patients with metastatic disease were excluded from enrollment. At a minimum follow-up of 60 weeks, 56 (91.8%) patients remained on treatment.

Clinical activity with MK-6482 was observed in non-RCC lesions. The confirmed ORR in pancreatic lesions was 63.9%, including 4 complete responses. The confirmed ORR in brain hemangioblastomas was 30.2%, with a CR rate of 11.6%. Also, 11 (68.8%) of 15 patients with retinal lesions demonstrated improvement in these lesions, with the 4 other patients reaching stable disease. Safety data showed that 60 of the 61 patients had at least 1 treatment-related adverse event (TRAE). The most common all-cause AE was grade 1/2 anemia, occurring in 51 (83.6%) patients. Eight (13.1%) patients had a grade 3 TRAE. Four (6.6%) patients had grade 3 anemia. There were no grade 4/5 TRAEs. There was 1 discontinuation due to a TRAE (grade 1 dizziness).

In a phase 1 trial (NCT02575222), Nivolumab (Opdivo) given as a Neoadjuvant has demonstrated tolerability in patients with nonmetastatic high-risk clear cell renal cell carcinoma as reported in a poster presentation during the 21st Annual Meeting of the Society of Urologic Oncology (SUO).1

Currently, Nivolumab plus ipilimumab (Yervoy) has demonstrated significant efficacy in treating patients with treatment-naïve metastatic RCC compared with the prior standard-of-care sunitinib (Sutent).2 The investigators sought to discover if the benefit of PD-1/PD-L1 inhibitors could be extended to the neoadjuvant setting, as an earlier study of neoadjuvant treatment with the multikinase inhibitor axitinib (Inlyta) had demonstrated significant shrinking of RCC tumors prior to surgery.3

The study was a prospective, open-label, single arm phase 1 trial that explored the safety and tolerability of nivolumab prior to surgery in patients with resectable nonmetastatic high-risk RCC. Patients with T2a-T4 with or without positive lymph nodes were eligible for the study if they were scheduled to undergo a partial or radical nephrectomy, had an ECOG performance status of 0 or 1, and adequate organ and bone marrow function. Nivolumab was administered at 3 mg/kg on day 1 of each of a total of 3 consecutive 14-day cycles. Treatment was followed by surgery within 7 days of completion of the third cycle. A total of 17 patients were included in the early-phase trial consisting of 16 with ccRCC and 1 with papillary disease. Fifteen had stage cT3a disease, 2 had cT3b, and all were negative for lymph node involvement.

At 24.7 months of median follow-up, the 2-year metastasis-free survival rate was 85.1%, and the overall survival rate was 100%. The 15 patients with ccRCC were restaged prior to surgery, but an overall minimal difference was observed in both the long and short axes from baseline to after treatment with nivolumab. However, 1 patient had an immune-related pathologic response and the rest had stable disease by radiographic criteria. The 1 patient who achieved a pathologic response demonstrated a regression bed with features of wound healing as well as immune infiltration.

Grade 3 adverse events (AEs) were reported in 11.8% of patients, and no grade 4 or 5 events were reported. AEs of any grade were reported in 82.4% of patients and were considered potentially due to nivolumab in 58.8%. The most common AEs reported were fatigue (41.2%), pruritis (29.4%), and rash (29.4%), all grade 1 in severity. No delays were reported in surgery, and no postoperative complications of Clavien grade 3 or higher were observed. “Early phase trial demonstrates the safety of neoadjuvant PD-1 blockade with preserved [quality of life] when administered to patients with nonmetastatic high risk ccRCC,” the study authors, led by Hiten D. Patel, MD, MPH, of the Department of Urology at Loyola University Medical Center, wrote in their poster.

Neoadjuvant nivolumab is also currently being studied in the phase 3 PROSPER RCC study in comparison with observation for patients with RCC undergoing nephrectomy (NCT03055013). 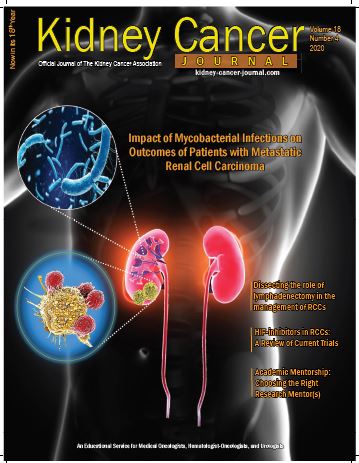